Power BI has released their first update for 2019 for Power BI Desktop. This update is filled with some exciting features that enhance what you are capable of achieving through Power BI. Two of the most exciting updates is in the analytical section where the Key Influencers visual is a new addition that allows you to explore data that are influencing data points and the Q&A feature with added auto-generated questions provide very strong analytical capabilities to Power BI.

Here follows a short summary of the new features, which will be explained in this blog post.

A new visual is on offer from Power BI to preview this month, Key influencers. This is a visual that quickly makes sense of the key drivers of the input fields of a visual.

To activate this feature you need to navigate to the Options dialog, where you can enable the preview feature. 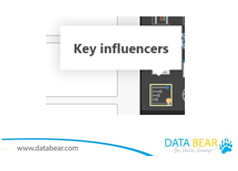 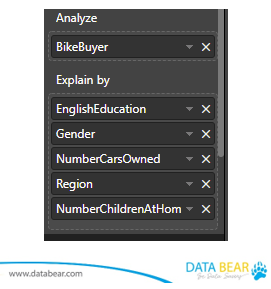 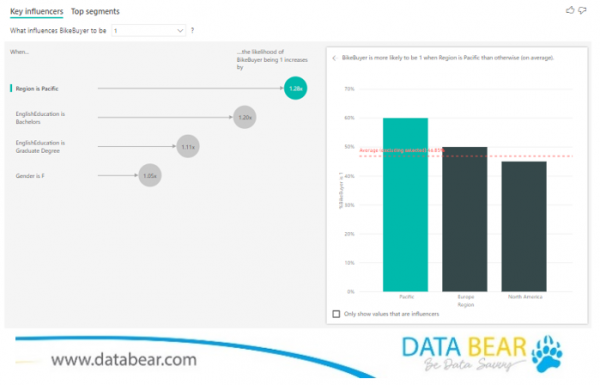 The visual comes with quite neat functionalities that really allows you to drill into your influencers. As seen in the image you are able to select a key influencer on the left and the visualization on the right will give you more information on that specific influencer. The visual further has the ability to filter by only those categories that really has the biggest impact on your influencer. This is especially useful if there are a lot of categories that may have an effect on the influencer, but you only require, like in most cases, to see the main categories. This may be filtered by checking the “Only show values that are influencers” checkbox on the bottom right to filter the visual. 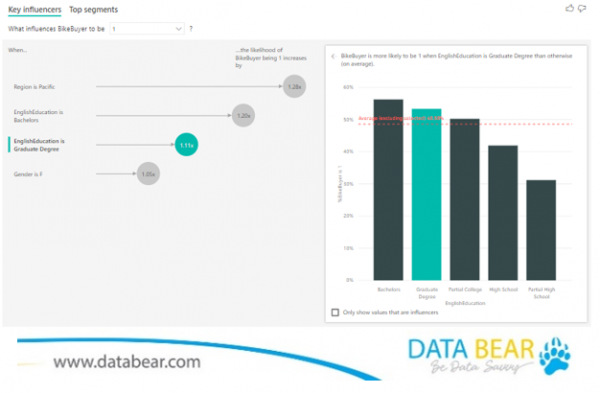 The second view of the visual is Top segments. This view will allow you to see data points within the topic that you are analyzing. In the below example we see segments of the population most likely to buy a bike. 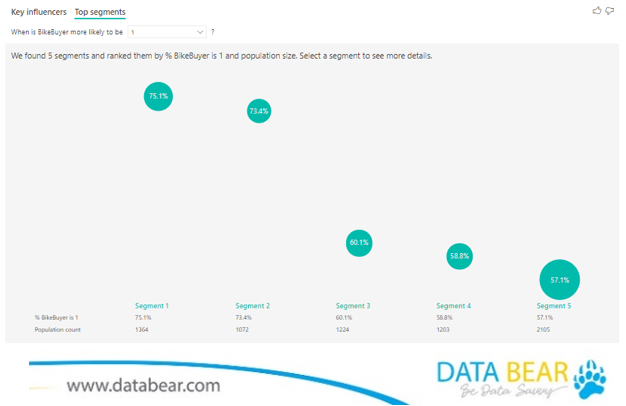 If you click on a segment, you can see the details of the segment including the number of data points in that segment, what percentage of the segment has the value of interest and key influencers for that segment. If I select segment 1 I can see that the segment is made up of people owning less than or equal to one car and comes from the Pacific region. This segment is 75.1 % likely to won a bike and is 26 percentage points higher than the average of 49.4 %.

The Q&A functionality comes with some more great features in the new release. You are now able to ask Q&A Insights related questions, such as “What is the comparative cost bet Q1 and Q3 of 2018” or “What is the effect on sales by marketing medium”.

While the Q&A functionality is really useful there are times where you just don’t know what sort of questions to as from your data. This becomes much easier now with the new auto-populate suggested questions. 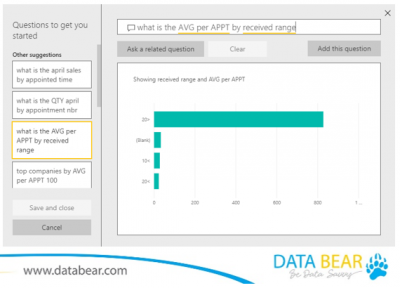 Power BI released a new preview feature this past November, the filter pane. In this month’s release, the filter pane is greatly advanced where you can personalize your title text size, header text size, and font family to the Filter pane card. This is a great feature as it gives added professionalism to your reports as you can customize your filter to match your report formatting. 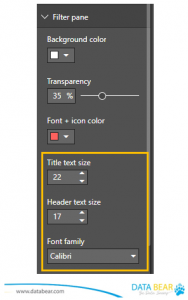 The formatting pane also has some new features namely: 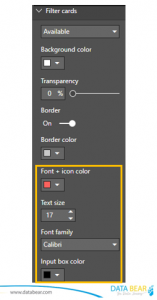 One frustrating aspect around visuals was the truncation of visual titles. If you had a long title and not enough space on your visual, just a fraction of your title was displayed with the rest of title ‘hidden’. Those days are gone with the new functionality of word wrapping, working the same as in other Microsoft apps such as Excel. 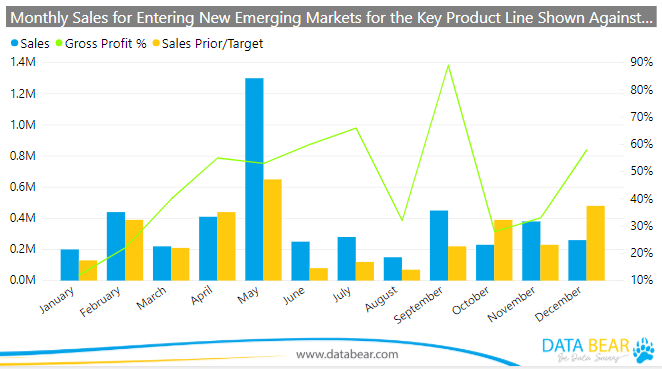 The word wrap feature for the title of your visual is found in the formatting pane under the title. 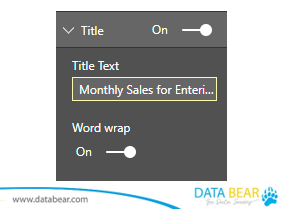 Your title will now be displayed in two or more lines. 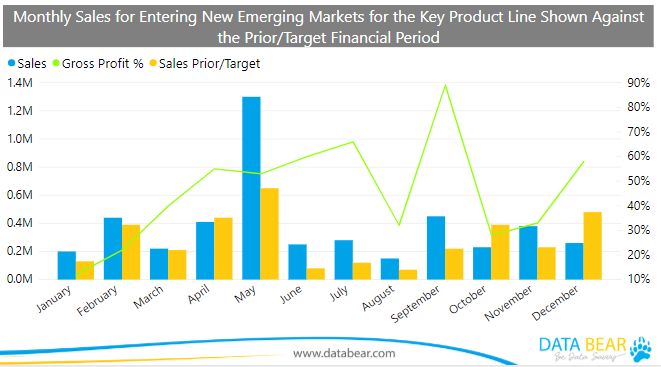 The default feature of visuals to interact with each other is set to cross-highlight. Currently, when you want to update your filters to cross-filter you have to manually go one by one and update all of your visuals through the edit visual interactions feature. This is no longer necessary with the new release. You simply go to the Options dialogue and select the added option under Report Setting namely: Change default visual interaction from cross highlighting to cross-filtering. 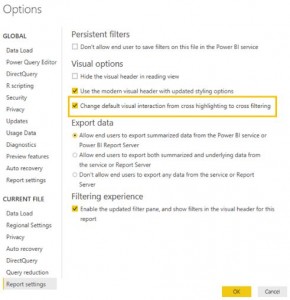 When this feature is selected your visual interactions will default to cross-filter. You will however still have the option to manually edit those visuals that you rather want to cross-highlight.

Another simple yet useful added feature that will enhance the flexibility that you have in formatting your visuals is the added the ability to round the corners of your visual borders. This option may be found in the formatting pane under the border card, select the border card and simply adjust the radius to suit your desired roundness of the borders.

That is it for the summary of Power BI’s February release. If you want the full list of new feature please visit the link below to see the full Power BI release.

Edward holds a Master's in Industrial Engineering and focuses on business development and process improvement. He achieves this through sound analysis and understanding of the challenge on hand and matching that with the appropriate process and/or technological change required leading to highly effective and efficient business operations.

Purple Thread Marketing
23:14 23 Mar 17
Johann is brilliant. The Data Bear solutions are just fantastic. The quantifiable improvement to any business using their Power BI Dashboards are worth 100 times more than the investment. Great stuff.

James Mack
22:48 18 May 17
We have been working with Johann and Dmitri for almost a year now. From concept to design and implementation, they have been nothing but professional and timely. They leveraged Azure and Power BI to sort and report our point of sales data. We have no reservation when it comes to recommending Data Bear and look forward to our continued partnership.

Laura Sailor
01:13 05 Apr 17
The DataBear team has been great to work with! They take the time to understand the problem and then put together a real-time solution. It's also great when they responds so quickly! We will continue to work with them!

Guru Sankar
07:11 08 Apr 17
Fantastic experience. Very customer oriented - in helping us think through our needs, suggesting solutions and then delivering on a great solution. Great guys to work with!

Ellen Howard
22:27 04 Apr 17
Extremely professional and easy to work with. Highly knowledgeable on all aspects of Microsoft Power BI issues and solutions. Would strongly recommend.

Prameet Dhaliwal
07:00 13 Oct 17
Johann and the team are a great resource if you are looking to implement Power BI. He has worked closely with the team here at Appdopt and they provide powerful insights!

Thierry Thielens
09:45 16 Feb 18
Incredible trainers. Very knowledgeable. Took me from zero to very decent level in no time. I'd highly recommend using them for your data modelling and training needs.

Jonathon Dawes
12:00 08 May 18
Fantastic training delivered clearly and effectively. Training was delivered at a pace that reflected our individual abilities and Johan ensured everything was clearly understood before moving on. Would happily recommend!

Marine Arribas
10:16 16 May 18
Very professional training from Johann who is highly knowledgeable, giving to the team great insights to project our use of Power BI. Highly recommended.

Thrudd Q
07:25 29 May 18
Highly informative and pitched at exactly the right level

Andy Freeman
13:44 31 May 18
We had the pleasure of attending the 2 day BI Course. Not was not only very informative, it was made extremely enjoyable by the very knowledgeable Johann who presented in a way we all understood. Highly Recommend anyone looking for some BI training to contact Data Bear

Andrew Brown
11:47 02 Jul 18
Great Power Bi training in London. A very comprehensive overview of this platform with a thorough agenda, good training materials and a friendly group; Johann is an excellent trainer with a great depth of knowledge and experience in Power Bi. Highly recommended.

Chris Halford
15:58 16 Jul 18
Johann provided excellent guided instruction and inspired the candidates to be excited about the possibilities of taking the learning away to implement.

Craig Burton
15:41 25 Jul 18
DataBear were a pleasure to deal with. We had a 2-day training workshop at our own location, Johann was very knowledgeable, not only delivering a well structured and organised piece of training, but also able to answer questions quickly. Thank you for a superb experience.

Jon Brown
13:06 05 Sep 18
Super clear instruction and tutoring by Johann. Great size of group (6) - meant that no-one in the class was left behind, and it seemed those ahead - were not too held back. It is a lot of info to take in for the 2 day course. Would highly recommend the 3 day course where possible! Jon Brown

Shannon Molloy
09:28 10 Sep 18
I recently attended the 2-day Power BI Course run by Johann. This was an intensive and extremely valuable course. Johann is a great instructor, he knows the subject well, and his pace is spot-on. There were many clear and easy-to-follow examples, and the emphasis on practical learning makes this a very worthwhile two days. I would recommend doing the three day course however, as there is so much content and I left wanting just a little more exposure to the final module. Many thanks Johann!

Christopher Bernatek
11:31 28 Sep 18
Being new to Power BI I was keen to organise some training for our UK data team. After some Googling I decided on Databear and gave them a call. Johann promptly called me back and we discussed the various training options and we arranged some onsite training to be held at our own offices. Johann provided two excellent days of training, full of knowledge, insight and explanations. With Johann you get right in to using the tool and apply what you are learning as you go. I would highly recommend Johann to anyone interested in learning how to use Power BI correctly and effectively.

Jordan Russell
12:51 28 Sep 18
I attended the three day PowerBI training course with Johann and found it extremely valuable and insightful. Johann has an excellent knowledge of the subject and the lessons are well structured. I would recommend people take the opportunity to learn and grow their skills through Data Bear .

Josh Davidson
09:15 26 Oct 18
Data Bear came in to run a two day course on Power BI, the attendees were from various levels of excel experience, but Johann kept the training relevant to all levels and made sure to carry everyone along. a very good way to start your Power BI journey.

Helen Smith
11:49 12 Nov 18
Excellent intensive, small group two-day course - best practise on data modelling was the most valuable section for me as this underpins the success of everything you could possibly want to achieve in Power BI! Highly recommend for those who have go their teeth into Power BI already and want to produce more effective and efficient work but also great for complete beginners as Johann will adapt to suit your needs, even in a mixed group.
<img class=rplg-blazy data-src=https://lh5.googleusercontent.com/-FHaOdSZIIMg/AAAAAAAAAAI/AAAAAAAAAAA/AGDgw-hqhi0PyFfqa9S_gBcvDGe0VZJDSw/s128-c0x00000000-cc-rp-mo/photo.jpg alt="Maria Razdelkina" onerror="if(this.src!='https://lh3.googleusercontent.com/-8he