An Introduction to M

M as a Query Language

We will start by giving an overview of the basics of M, which must be grasped before moving on to the rest. Below is a representation of M in the Power Query Editor in Power BI.

As seen in the above image, the M function has two main ‘bodies’ the ‘let’ and the ‘in’ body. Before explaining ‘in’ and ‘let’, it is important to note that the M language is case sensitive. Both ‘let’ and ‘in’ is in small caps and won’t have the same meaning when not written in small caps.

The let block defines and calculates and compiles all variables.

The ‘in’ block is the output of all the calculations. Yes, it sounds strange that ‘in’ means output, but that is exactly what it is.

Now that we have an idea of what ‘let’ and ‘in’ means we can take a closer look at other details.

A comma ends a line of code in M. If there is no comma in place the code will just continue. Let’s look at an example:

The above M Language code will return a result of 1.

If we write the following M Language code:

The output of the above will be 2. If you look carefully we did not end the line with a comma, thus M language just keeps on reading the code and returns a value of 2. Let’s look at an example where we introduce a comma and add a second line of code to our query.

The result of the above code is 21 as our variable y is equal to 1 and to determine x we added 20 to y.

After the addition of Table.PromoteHeaders we are returned with our column names that were in the first row of our table as column headers.

Visit Power BI’s page where they outline all the functions available in Power BI.

Variables are also important to understand better. As in our examples above we used simple variables such as x and y. From our example out of Power BI we see that we have a variable called #”Promoted Headers”. Variables may take on any format. It can be one word such as ‘promoted’ or it can be multiple words and must be enclosed by double quotations (“).

From our sales table, we would like to see if our sales price falls into a certain bracket. Our brackets will be below $10, below $20 and above $20. We can achieve this by creating a custom column in our query editor and using the Nested if statements in the M language. 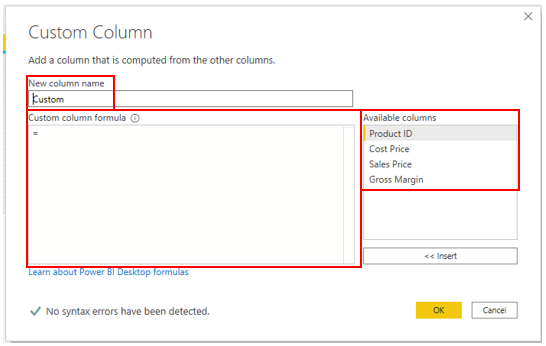 Let’s examine the below nested if statement. 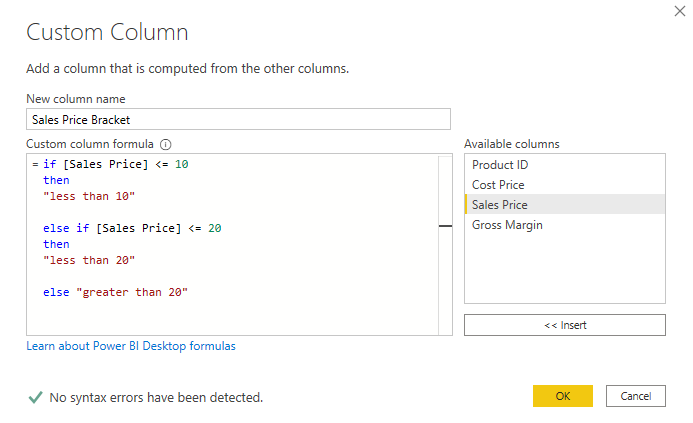 The custom column will return a new column in our table as shown below:

Let’s take a closer look at how this populates our Query Editor:

This should shed some light on how the backend of the Query Editor works with the available functionality in the Power BI, such as adding a custom column. We used the custom column functionality to create a new column, but we could have written the M code straight in the Query editor to obtain the exact same result.

Providing comments in your code in any language is very valuable to make sense of what you are doing. This is especially relevant when there are more complex calculations. In M there are two types of comments:

To define a single-line comment use a double slash ‘//’.

This was an introduction to M and should shed some light on the function of the M language. Although there are many more aspects to the M language it is essential to grasp the basics explained in this post. As with any language, it is important to self-study and practice in order to get familiar with the working thereof. This is the first post on M language for the Databear team, but be sure to keep on following us for more content on this matter.

Edward holds a Master's in Industrial Engineering and focuses on business development and process improvement. He achieves this through sound analysis and understanding of the challenge on hand and matching that with the appropriate process and/or technological change required leading to highly effective and efficient business operations.

Purple Thread Marketing
23:14 23 Mar 17
Johann is brilliant. The Data Bear solutions are just fantastic. The quantifiable improvement to any business using their Power BI Dashboards are worth 100 times more than the investment. Great stuff.

James Mack
22:48 18 May 17
We have been working with Johann and Dmitri for almost a year now. From concept to design and implementation, they have been nothing but professional and timely. They leveraged Azure and Power BI to sort and report our point of sales data. We have no reservation when it comes to recommending Data Bear and look forward to our continued partnership.

Laura Sailor
01:13 05 Apr 17
The DataBear team has been great to work with! They take the time to understand the problem and then put together a real-time solution. It's also great when they responds so quickly! We will continue to work with them!

Guru Sankar
07:11 08 Apr 17
Fantastic experience. Very customer oriented - in helping us think through our needs, suggesting solutions and then delivering on a great solution. Great guys to work with!

Ellen Howard
22:27 04 Apr 17
Extremely professional and easy to work with. Highly knowledgeable on all aspects of Microsoft Power BI issues and solutions. Would strongly recommend.

Prameet Dhaliwal
07:00 13 Oct 17
Johann and the team are a great resource if you are looking to implement Power BI. He has worked closely with the team here at Appdopt and they provide powerful insights!

Thierry Thielens
09:45 16 Feb 18
Incredible trainers. Very knowledgeable. Took me from zero to very decent level in no time. I'd highly recommend using them for your data modelling and training needs.

Jonathon Dawes
12:00 08 May 18
Fantastic training delivered clearly and effectively. Training was delivered at a pace that reflected our individual abilities and Johan ensured everything was clearly understood before moving on. Would happily recommend!

Marine Arribas
10:16 16 May 18
Very professional training from Johann who is highly knowledgeable, giving to the team great insights to project our use of Power BI. Highly recommended.

Thrudd Q
07:25 29 May 18
Highly informative and pitched at exactly the right level

Andy Freeman
13:44 31 May 18
We had the pleasure of attending the 2 day BI Course. Not was not only very informative, it was made extremely enjoyable by the very knowledgeable Johann who presented in a way we all understood. Highly Recommend anyone looking for some BI training to contact Data Bear

Andrew Brown
11:47 02 Jul 18
Great Power Bi training in London. A very comprehensive overview of this platform with a thorough agenda, good training materials and a friendly group; Johann is an excellent trainer with a great depth of knowledge and experience in Power Bi. Highly recommended.

Chris Halford
15:58 16 Jul 18
Johann provided excellent guided instruction and inspired the candidates to be excited about the possibilities of taking the learning away to implement.

Craig Burton
15:41 25 Jul 18
DataBear were a pleasure to deal with. We had a 2-day training workshop at our own location, Johann was very knowledgeable, not only delivering a well structured and organised piece of training, but also able to answer questions quickly. Thank you for a superb experience.

Jon Brown
13:06 05 Sep 18
Super clear instruction and tutoring by Johann. Great size of group (6) - meant that no-one in the class was left behind, and it seemed those ahead - were not too held back. It is a lot of info to take in for the 2 day course. Would highly recommend the 3 day course where possible! Jon Brown

Shannon Molloy
09:28 10 Sep 18
I recently attended the 2-day Power BI Course run by Johann. This was an intensive and extremely valuable course. Johann is a great instructor, he knows the subject well, and his pace is spot-on. There were many clear and easy-to-follow examples, and the emphasis on practical learning makes this a very worthwhile two days. I would recommend doing the three day course however, as there is so much content and I left wanting just a little more exposure to the final module. Many thanks Johann!

Christopher Bernatek
11:31 28 Sep 18
Being new to Power BI I was keen to organise some training for our UK data team. After some Googling I decided on Databear and gave them a call. Johann promptly called me back and we discussed the various training options and we arranged some onsite training to be held at our own offices. Johann provided two excellent days of training, full of knowledge, insight and explanations. With Johann you get right in to using the tool and apply what you are learning as you go. I would highly recommend Johann to anyone interested in learning how to use Power BI correctly and effectively.

Jordan Russell
12:51 28 Sep 18
I attended the three day PowerBI training course with Johann and found it extremely valuable and insightful. Johann has an excellent knowledge of the subject and the lessons are well structured. I would recommend people take the opportunity to learn and grow their skills through Data Bear .

Josh Davidson
09:15 26 Oct 18
Data Bear came in to run a two day course on Power BI, the attendees were from various levels of excel experience, but Johann kept the training relevant to all levels and made sure to carry everyone along. a very good way to start your Power BI journey.

Helen Smith
11:49 12 Nov 18
Excellent intensive, small group two-day course - best practise on data modelling was the most valuable section for me as this underpins the success of everything you could possibly want to achieve in Power BI! Highly recommend for those who have go their teeth into Power BI already and want to produce more effective and efficient work but also great for complete beginners as Johann will adapt to suit your needs, even in a mixed group.